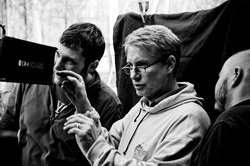 Brad Hoover has a long history of teaching filmmaking to talented students.  This aspect of his career began in 1995 as a primary production instructor at the Seattle Film Institute in Seattle, WA, and continued until moving in 2001 .  After living a few years in Illinois, he moved to Asheville, NC where he began teaching filmmaking in 2005 at a local film studio.  A few years later in 2008, the Seattle Film Institute opened a sister school in nearby Greenville, SC, Carolina Film Institute, and Brad became Carolina Film Institute’s primary film production instructor and school director.  He currently holds this position teaching year round, which consists of two 40-Week Total Immersion Filmmaking Programs, and a Summer Teen Filmmaker Program.

Brad also occasionally volunteers to work with and teach local students in other acting and filmmaking groups in Asheville, NC.